Why you should reconsider asking interviewees, ‘How much do you currently earn?’ 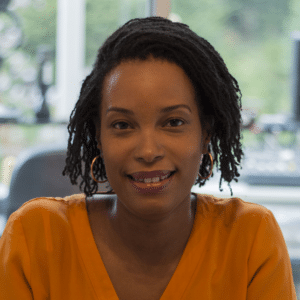 Transparent pay bands make wages fair for ethnic minorities, believes Selina Flavius, founder of Black Girl Finance (blackgirlfinance.co.uk). She is the best-selling author of the book of the same name.

There are more CEOs of FTSE 100 companies with the name Steve or David than there are CEOs who are women or people from ethnic minorities put together, quotes Selina in Black Girl Finance. As a Black woman whose mother came to Britain from St Lucia, Selina grew up in a culture that did not speak openly about money, something which she believes is holding back millions of Black female employees from making the most of what they earn.

She considered an A-level in economics but when she didn’t see any other people like her in finance, she decided against it. When she began her career, Selina accepted she would have to work hard for low pay and admits she “didn’t have a clue about money”.

After living from paycheque to paycheque, she finally decided to take control of her finances. In two years, Selina went from being an account executive in a technology firm to writing her own Instagram blog (which she began after not being able to find a single empowering quote about money by a woman of colour), to setting up a financial coaching company aimed at Black women and wrote her book, one of only two ever published in the UK by Black females.

Selina believes D&I and HR leaders can make a huge difference in changing their employee’s mindsets by making sure everyone receives fair renumeration.

Q: It is your belief that Black women have grown up with a different mindset about money. Was that the reason why you set up Black Girl Finance?

A: “It’s one of the reasons. In our house there were two rules from my mum’s culture: you didn’t ask her age and there were no conversations about money. Since writing the book, I’d say the majority of women I’ve spoken with so far, they’ve had the same experience. So I think there is something there. We can’t generalise – Black women and people from different backgrounds have different experiences. But I’ve found it tends to hold true.”

Q: You set up your financial coaching company in 2019. Did you face any obstacles?

A: “The very first person I told about my idea wasn’t very positive about it. They asked me, ‘Why do women need to talk to a woman? Why do they need a special place to talk about money? They can just go and see an advisor.’ It wasn’t a great start. But I continued, I persevered, because I wanted to create a safe space for women to be able to talk about money.”

Q In your book you state that the UK economy is losing more than £26 billion every year because of discrimination against ethnic minorities. Are you positive at all about the future for black women in the financial industry?

A: “I try to be really positive. I feel like there are things we can do individually. I encourage the people I coach to do some research about money and get professional advice so they can handle money in the best way possible.

“And it’s not just me doing this type of work. I’m in a great circle of other women doing similar things.

“Since creating the platform, I’m more aware of Black women who are in the financial sector – accountants, investment managers. When I decided not to do economics A level there was no frame of reference for me but now I feel like there are more women who are more visible within the industry. This year we had our finance festival, which was a day-long event where I wanted to really highlight those women within the industry. I am now planning another one to make those women more visible.

“I get messages from readers saying they are reading my book on the beach. I never thought I’d see a personal finance book being read on the beach! It has really made that money conversation a lot more accessible to a lot of people who perhaps wouldn’t have known where to go to get the information.”

Q: Have you found any companies that are trying to redress the balance and employing fewer Daves and Steves and more Selinas?

A: “I have had CEOs reach out to me from a range of banks talking about setting up shadow boards. And they are asking not just about how can they get more senior leaders from Black, Asian and minority ethnic backgrounds on their board but also how to broaden their customer base. They know their products and services can help people achieve their financial goals. That was touching because it isn’t just about the bottom line.

“Some banks such as Lloyds TSB are going beyond what is required of them, by reporting their figures about the number of ethnic minority employees and customers. They want to start measuring to see where they are beginning and where they want to go.”

A: “By ensuring equal opportunities and equal pay. There was a report, just last week, that said that in terms of applying for pay rises, people from white backgrounds were 40 per cent more likely to get that pay rise and a higher job role. Whereas people from Black and Asian minority backgrounds were 20 per cent as likely.

“And I guess getting rid of that old boys network that previously existed and still does in some organisations. Also, by making sure that when HR managers are sourcing candidates that they go to organisations that are going to give them a diverse range of candidates.”

Q: Do you think it is the sole responsibility of diversity and inclusion leaders to turn those figures around?

A: “Everyone should be responsible. In an organisation, everyone is part of it, everyone does an important job. Obviously, people who are part of the DNI network are at the forefront. But even if you’re not part of that network, you should be supporting the work that they are doing. I think everyone can make a difference and have an impact.”

Q: Another really interesting statistic in your book is that Black African and Bangladeshi households in the UK only have 10 pence of savings and assets compared with every £1 of white British wealth. What advice would you give to a young black employee concerned about their finances?

A: “Prioritise it. Be curious and talk about it. At your job interview have a think about salary and do some research beforehand. You want to make sure that you’re being renumerated for the job to the correct level because a lot of the pension schemes we have within workplaces, you are paying a percentage of what you earn. If you’re earning less, you’re going to be paying in less which over the long-term has a compound effect. It’s an issue that feeds into the lack of wealth within those communities, that kind of pay disparity. Thinking about money when you’re going through your career is important.”

Q: What would your message to HR and D&I leaders?

“Get rid of that question ‘How much do you earn?’ If an employee starts off on a low pay, it goes with them throughout their career. They will never be able to make up that difference if they are constantly asked their salary and accepting that lower wage. If you want to give people opportunities to earn more than that salary, great, but I think setting a benchmark is a good start. Again, it’s giving people anyone the opportunity to thrive and put themselves forward as well. The Fawcett Society is doing a great campaign called #EndSalaryHistory (https://sites.google.com/view/fawcett-east-london/endsalaryhistory/endsalaryhistory-pledge?authuser=0)

Q: What’s next for you, Selina?

A: “We’re planning the second Black Girl Finance festival event. My motto is that whichever way someone’s going to consume money information, I want to be able to make it accessible – books, audiobooks, podcast. We are going to be launching some courses as well, and also some training to give people an opportunity to become a finance coach.

“I want people to feel empowered. Someone might see the depressing stats and think there is no point. But with the interest in the book and the podcast and platform, it is encouraging for me that things will change.”

Menopause and disability at work

Who is responsible for addressing unconscious bias?